There’s a Squirrel in My Chimney! 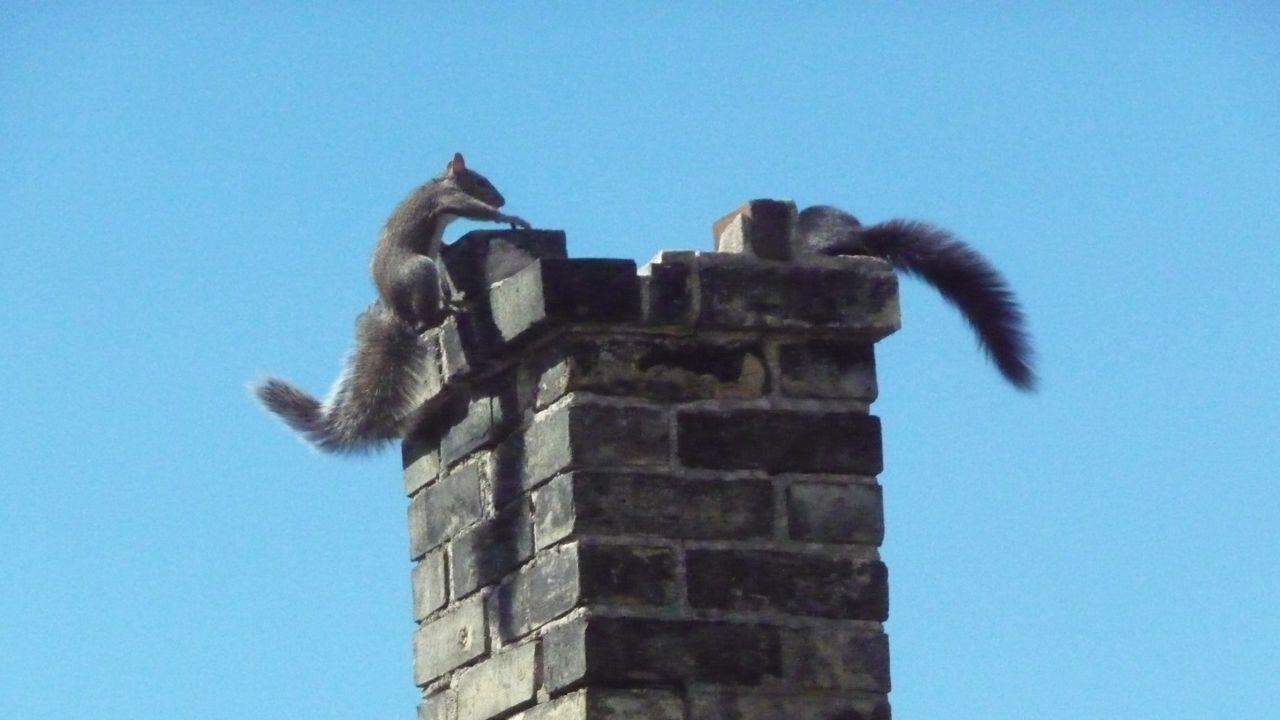 10 Jul There’s a Squirrel in My Chimney!

There’s a Squirrel in My Chimney!
I was very lucky to grow up in a house with a fireplace. I have many fond memories of coming in after a cold winter day playing in the snow and sipping hot cocoa by the fire. After a brisk autumn day raking leaves in the backyard, my family would come in and have apple cider and roast popcorn in wire popcorn basket over the fire! While I have many heartwarming memories of our time around the fire place there is another funny memory from my childhood that that stands out – the day a squirrel got into our home!

One fall morning, my mother was cleaning up the kitchen and heard some strange noises coming from our den, the room that had the fireplace. She said it sounded like chirping and scratching. She walked into the den and saw a squirrel perched on the hearth of the fireplace! It had obviously entered the house through the chimney. This really startled her and since she was home alone she was not quite sure what to do! The story goes that she eventually opened the back door and chased it out with a broom – thus ridding the house of this fidgety rodent. While this is a funny memory that I have of my childhood – it got me to thinking about what I would do if there was an animal stuck in my chimney as well as asking myself how do I prevent animals from using my chimney and fireplace as easy access to my home?

The easiest way to prevent animals from entering your home through the chimney is to keep the flue to the fireplace closed any time that you are not lighting a fire. (This is obviously something that my parents forgot to do!) In addition, a chimney cap with attached wire netting also makes it difficult for animals to get inside a chimney. However, sometimes critters may make it into your chimney and either like it so much that they decide to build a nest and call it home, or they may have possibly gotten stuck. In addition to squirrels, rodents and the occasional bird, raccoons may often take shelter in the winter months in your chimney. In the spring and summer months, mother raccoons often take advantage of chimneys and build nests to use as denning sites for raising cubs.

If an animal has made it into your chimney but hopefully not into your home – what can you do? You should definitely not attempt to remove the animal yourself. The ASPCA recommends that you hire an experienced professional to have the animal humanely removed from your chimney. The experienced staff at Pro-Tech Chimney Sweeps can safely remove any unwanted animals or critters from your chimney. They can also remove any nest or animal debris and install a chimney cap to prevent any animals from entering your chimney in the future.
If you have a squirrel (or any animal) stuck in your chimney – call the animal removal experts at Pro-Tech Chimney Sweeps at 631-806-8550 or 516-284-1295.

Sorry, the comment form is closed at this time.